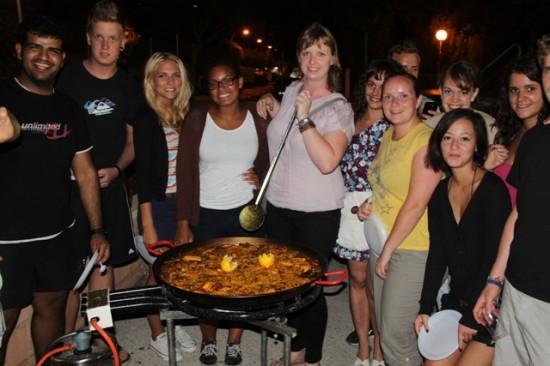 Summer is coming to an end and like every year it has been full of parties, activities and excursions … Learning Spanish in the Valencian region is an experience that is rich in emotions.
Last week we have had two great events to end the month August: La Tomatina and Els Bous a la Mar. Here you have a summary of these fun activities that usually mark the end of summer.

La Tomatina
This year La Tomatina had a record-breaking attendance of people. More than 50,000 people came to share this special tomato war. Spanish schools throughout Valencia contributed to surpassing this figure and had a great time in doing so.
4 AMEELE Spanish schools, three from Valencia and 1 from Castellón , hopped on their busses and headed for Bunyol. La Tomatina begins early, at 11 am, so we made our way at 08.00 to give us time to have our lunch. As you can see from the photos, we prepared a feast of good food and drinks. For lunch we had a sandwich, typical for Spanish cuisine: sausage with tomato. As we ate, the music was playing, we had some beers and sangrias, and we shared a very relaxed and fun time.
Right before heading to the big battle, we took shots of a liquor that is typical to Valencian people: Cazalla, flushing it down and getting a little wet with Siphon. It was quite a show. Here is the group photo. We were with more than 150 people. Here we are still clean but after the war everything had changed.
Bunyol is a mountain village, thus it has uneven grounds. We had lunch at the periphery of the village, which is located on higher grounds, so to go to war we had to go down through the streets of the town for about 20 minutes.
Along the way we passed many people in a very good atmosphere, full of people, food and drink stalls on the streets and some music sites. It’s August and it’s hot, so we were also a bit wet with water.
The battle takes place in a very large area which covers several streets, so everyone was very busy awaiting the arrival of the trucks carrying tons of tomatoes. The villagers throw water from the balconies of their houses to relieve the people of the heat. And of course, this is very much appreciated!
When the trucks begin to make their entrance, the war begins. This series of photos express what happened next better than words ever could. Bous a la Mar
This activity is great and we do it every year. If I’m not mistaken, this festival is celebrated only in two towns in Spain, Denia and Javea, which is where we were last Friday. We left at 16:30 pm in a private bus that took about an hour and a half to arrive.
The journey was very pleasant and we put on a movie in Spanish with subtitles in Spanish, so students were practicing on the road. The first bus passed through the town of Denia and then went up through a set of winding roads that run through a beautiful Mediterranean landscape, with the sea on one side and the imposing Montgo on the other.

Our first stop was at the Cabo de San Antonio, from where we could admire the beauty of the bay of Javea, with its blue waters and white buildings. After taking a few pictures and stretching our legs for a bit, we went down to the town of Jávea to go to the harbor area, where the festival took place.
There is a semicircular bullring near the harbor entrance. The atmosphere was fun, with music and lots of people coming to see the bulls run through the square. The village boys tempted the bulls to try and catch them when they arrived and children were being thrown into the water. It was very funny and sometimes the bulls were also fell into the water! All of our students took pictures like crazy and had fun watching a show that was somewhat unusual.
In addition, all students were delighted to know that in these types of events they never kill or mistreat the bulls. Here, the animals are well respected and all they do is run for a while and then rest. The bulls are the same every year, until they are very old. Everyone was shocked when they saw the bulls could swim perfectly fine! Next to the small bullring there was another interesting place: a large bar counter where they sold very cheap drinks (beer for 1 €) and superb fresh fish tapas, straight from the sea, at a very affordable price as well, 3 €. We were testing different tapas, e.g. grilled sardines, squid, shrimps, prawns, mussels, etc… Fish had never before tasted so fresh and so good in our lives! Also it was very well priced! We were in the square for a couple of hours, from 19:00 to 21:00. We then walked to the place where they held a paella contest. There, Chef Nando cooked three paellas and all the students were helping and learning to cook this dish that is so typical for Valencia. We also had drinks and there was lots of music, with a very friendly DJ that was over 60 years old, has had great international success and is renowned for his house music.
Finally, around 2:30 we boarded the bus to go back and put on another movie to entertain us along the way. Many people fell asleep quickly as it had been a long and exciting day.