Study Spanish in Dénia and dive into a historical and cultural experience. 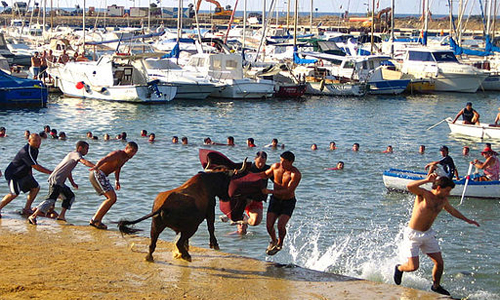 Summer is one of the best times for students of Spanish to visit Denia, located in the Valencian region of Spain. The town is naturally appealing to tourists with its beautiful, long beaches, together with its bar and restaurant terraces flooded with laughter and festive atmosphere. The icing on the cake, so to speak, is of course the local festivities which take place during the months of July and August. Here, students from TLC DÉNIA a Spanish school accredited by the Cervantes Institute, have the opportunity to see and experience these traditional celebrations first hand.
In July, Dénia celebrates its main festival in honor of the Holy Blood. This event dates back to the year 1587. The festival is celebrated with an extensive programme of activities including sports tournaments, musical concerts, religious events, fireworks and much more.
One of the most popular events planned is the ‘Bous a la Mar’, declared a ‘National Tourist Interest’ in 1993 due to its age, originality and tradition. Students can watch in awe as the bulls chase brave participants down the town’s main street until they reach the half-moon plaza, which is open to the sea, at the port. In the plaza participants try to make the bull fall into the sea without touching it. Once the bull has taken a dip, a boat helps it up the ramp next to the square and back to dry land.

Another event not to be missed by both young and old is the town parade, declared a Provincial Tourist Interest, which takes place on the last Saturday of the week-long festivities. The parade floats, many of which are handmade by the ‘Fallas’ craftspeople, travel through the streets of Dénia full of music, imagination and under a hail of streamers and confetti. Creativity is the centre of the party. But the fun doesn’t end here! In mid-August the streets of Denia are taken over by the Moors and Christians. During this celebration, participants don colourful costumes and parade to traditional music in commemoration of the retaking of Dénia, and also in honor of San Roc, the town’s patron saint. With these popular and lively celebrations TLC DÉNIA students are immersed in constant reenactments of times gone by, which capture their imaginations making the whole experience unforgettable ,and leaving them wanting to return to Dénia and our Spanish school.