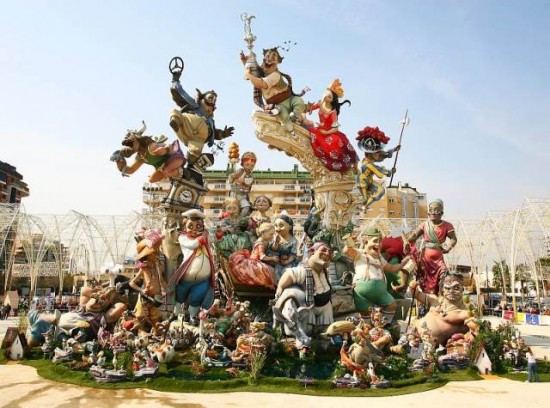 Visiting Valencia in March is without any doubt the best moment to take advantage of the climate while enjoying the best festival of the year in Valencia, “Las FALLAS”.

The atmosphere starts on the 1st of March, with the “Mascletàs”, pyrotechnic shots that take place every day at 2:OO PM at the Plaza del Ayuntamiento until the 19th of March.

Las Fallas is the most important and the most well-known festival in Valencia. It appeals a large number of tourists who come from different countries to admire the show and the work of the artists who spend months preparing the event. During las Fallas, Valencia becomes the city in which artist can express themselves, and all around the city you can find statues made of papier-mâché. Valencia lives to the rhythm of music, colours in an atmosphere that is indescribable.

Officially, las Fallas start the last Sunday of February with the “Crida” that takes place at the “Torres Serranos” and that finish in March 19th.
But, it is really in March 15th that the Fallas start. During this week, the Fallas (statues) are put up in the different neighbourhoods of the city. As a consequence, tourists can see all the statues. Most of the time, las Fallas are satirical representations of Spanish or world daily life. It can be satirical representations of politicians, of cartoons´ character etc..
The last day of the Fallas, the 19th of March statues disappear in a spectacular fire and the festival finishes like that. The Spanish school INTEREUROPA is located in the Plaza del Ayuntamiento of Valencia, a real advantage to enjoy the experience of the Fallas from the balcony of the school.
INTEREUROPA runs different Spanish courses at different levels.
Moreover, the school organizes activities for the spare time for all its students such as sports, cultural visits, tapas dinners, etc..

These activities will allow you to practice the language in a dynamic and relaxed atmosphere. It is also a good way to meet other students from the school and from the city.

¡We are waiting for you in Valencia!