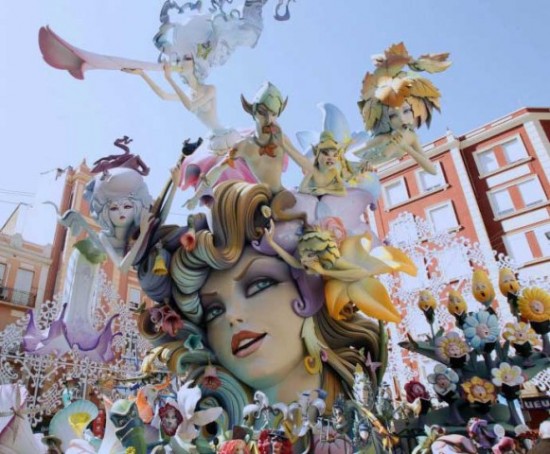 From the 1st until the 19th March Valencia gets full of light, color and party, Fallas start! To enjoy this festival it is not necessary to be from Valencia: anyone who comes to the city can share this incredible festival with local people. And the students who come to Turia’s capital to study Spanish are not any different: paellas, mascletàs, and visits to the most important Fallas…anything could be an excuse for learning Spanish, getting to know the city, its culture, and people, lots of people!

The last Sunday of February, like every year, the first act of Fallas was celebrated: the cridà. From the Serranos Towers the Major Fallera of Valencia welcomed the new Fallas year and she proclaimed to the world that Fallas have started. Students on the Spanish course already attended that first act in the city.

And after this first contact with the main festival in Valencia lots more start. Every day at 14h the students on a Spanish course can go to the Plaza del Ayuntamiento to enjoy the mascletà, one of the most popular events in Fallas. In addition, the typical paellas competitions are also a great moment to meet the gastronomic culture of the region. Young people who come to Valencia to learn Spanish can participate in those competitions, which are organized among different language schools or in the port. But Fallas are not only firecrackers and paella. During this festival the people who come to Valencia to study Spanish can enjoy lots of more things. First, they can visit the most important Fallas in the city and the art of building the amazing papier maché monuments that dress each corner of the city in that time. They can also visit the most spectacular illuminated streets, such as Sueca or Cuba. Finally, from the 15th to the 19th March, the Fallas greatest days, the students who want to learn Spanish can enjoy the castillos, firework shows that are done every night on the banks of the old River Turia; the verbenas falleras with live music on almost every street of the city; the ofrenda to the Virgen de los Desamparados; or just a good horchata con fartons or a chocolate with churros whilst visiting the winning fallas. Costa de Valencia Spanish language school provides its students a wide range of activities to make the most of Fallas, so that they can combine their Spanish course with the celebration of one of the best festivals in the world.