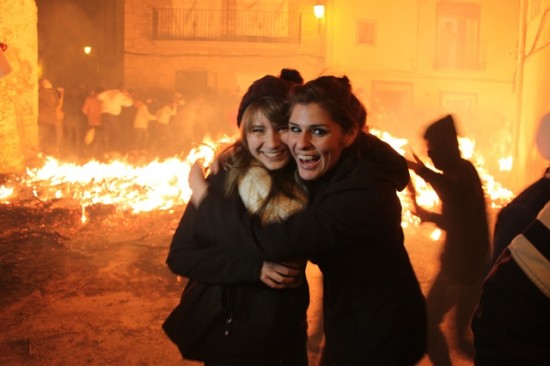 San Antonio Abad is the stockbreeders’ patron and the protector of animals. More than hundreds of towns near Valencia commemorate around the 17th of January with festivals, parades, masses, religious precessions the festivity of San Antonio Abad. Another reason for all the Spanish Language Schools of the Valencia Region to organize excursions, to better know these festivals, every year.

THE CITY OF VALENCIA
Every year in the city of Valencia takes place the traditional Blessing of the animals in Sagunto street. Miles of participants with their pets walk along this neighborhood to the church of San Antonio Abad. It’s a very rooted tradition in Valencia, which gathers plenty of people who actively participate with their pets, horses and wagons. THE BIGGEST CAMPFIRE OF THE WORLD IN CANALS

Actually, the most known and unique thing of San Antonio Festival in Canals is the fabulous bonfire in honour of the Patron. Tons and tons of firewood gathered together since the 7th of December to form a beautiful cone of wood which is set on fire by the night of the 16th of January. The importance of such a short-lived monument is emphasized since 90’s in the Guiness World Records Book as the biggest wood firecamp in the whole world. THE FESTIVAL IN CASTELLON

San Antonio Abad is commemorated in almost the same way through the region, but every place has its own characteristics. Common elements, as demons or community banquets around the campfire, or the strange and a little terrifying clothes of the main characters, made of the same cloth of the costumes. The mean characters play a very important role because they represent the last races of paganism, finally defeated by San Antonio. In this case fire get a purifying effect, as usual.

San Antonio is the most suported traditional festival in Castellón

The Santantonada consists of a popular representation of San Antonio’s life, which ends with the setting of fire of a cabin in the wood with a set of strange characters. Demons at the medieval fire festival in Forcall

This kind of representations are very old, played very often in the Late Middle Ages in the whole Europe. The 17th of January San Antonio Abad Festival has been celebrated since the 5th century and is highly supported in many towns.

The celebrations in Villanueva de Alcolea, whose origins traced back to the 15th century, take place for 2 days, starting with a representation in which horses are tamed, followed by a pyrotechnic tower which announce the setting on fire of the aromatic firecamps in the little streets of the town. At the end it’s the turn of the Blessing of pets which takes place on the area in front of the church. The event ends in the night and then the Tropell takes place, announced by bells. It’s a kind of equestrian race through the streets where they have to cross the firecamps. That’s why riders adorn them with mantels full of flower all over the edge. It’s a spectacular representation which the students of the school of Spanish, Costa de Valencia don’t miss since years.