10 things you should not miss in the “Fallas” 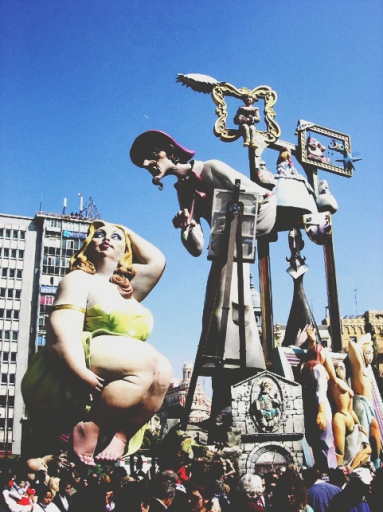 Fire, hot chocolate, music, firecrackers, monuments, colourful lights and a lot of people. This is the real formula for “Fallas”, which you will never forget. The “Fallas” mainly take place in the streets. Every square and avenue is crowed with people and in every corner bands are playing music. They sell hot chocolate in every corner and moreover you can dance till the sun rises in any street party, which are opening every night. As follows we will give you some hints, so that you can enjoy the “Fallas” like an authentic Valencian. 2. The firecrackers
Another indispensable element to celebrate great “Fallas” are the firecrackers. You can throw them in the streets, but always do it with respect and watch out for the people around you and that you don’t bother them. You will hear the firecrackers the whole day from the early morning till the nightfall.

3. The “Mascletá” (firework without lights but with loud bangs)
But without doubts the best moment to enjoy the firecrackers is the “Mascletá”. Every day at 14, at the square “Plaza de los ayuntamientos”, is a big show of fireworks, which you cannot miss.

4. Music bands
Another good way to enjoy a day in the “Fallas” is to join a music band and move around the city with them. You can drink and meanwhile visit the city, listening to the rhythm of the “pasacalles valencianos”. Music is one of the most important elements of this celebration. You don’t need to be able to play any instrument. Where the musicians go, there the party continues! 5. Fireworks
If you already enjoyed the firecracker than you cannot afford to miss the traditional “castillos” (fireworks), which take place every night. Thousands of forms and colours light up the nightly sky of the city. The most beautiful of these fireworks takes place in the night of the 18th of March, the night, which is named “nit del foc” (Night of the fire). This is the perfect moment to enjoy a romantic night.

6. The offering
As many festivals in Spain, also the “Fallas” have a portion of religious favour. The “ofrenda” (offering) is a flower giving, which the “falleras” and “falleros”, dressed in their typical costumes, give to the virgin María in the square “Plaza de la Virgen” on the 17th, 18th and 19th. In this event you will find a lot of music, many colours and also a lot of valencian traditions. And over all a lot of flowers!

7. Chocolate con Buñuelos (typical spanish sweets with hot chocolate)
For the beginning to enjoy the “Fallas” you have to find a good place to try “el chocolate con buñuelos”. Without doubts the best place to go to try them is the distric of “Benimaclet”. In the street named “Carrer de Pucol”, next to the main square of the district, you will find every day two woman making the “buñuelos” either with pumpkins or figs and you can try them. Valencian delight for take-away. You have to try it!

8. The lights
When the night breaks the city is full of colourful lights. The most spectacular ones are those, which are located in the district of “Russafa”, in the “Falla” in the street “Cuba-Literato Azorín”. More than 500.00 lamps will light up and colour this part of the city like a nightly garden.

9. Street Party
Not only lights and firecrackers animate the night. Hundreds of “verbenas” (street partys) divide up over the city. On improvised dance floors in the streets, music is played and the party is guaranteed. It is sure that you will have fun!
10. La Cremá (The burning of the “Fallas”)
Of course, the last night is the most special. It’s the night of “la cremá”. All the Falla monuments you where able to visit during the celebration, will be burned and the whole city look like one big fireball. The fire will be like a purifier, and you can enjoy the last hours of the “Fallas” around the hot fire and meanwhile the last notes of the bands will float away.

And, to enjoy the last night as much as possible we recommend to not miss “la cremá de la falla “Quart-Palomar” (burning of the falla “Quart-Palomar”), in the old town. It is one of the last Falla monuments that will be burning. Traditionally, the fire brigade squirts water with their hosepipe on the spectators around. A funny habit that has been extended in the last years at other “Fallas” in the city too, but here you can enjoy it the most until 3 o´clock in the early morning.

After all these recommendations, there is only one thing left you have to do… Enjoy the Fallas with Taronja Spanish school!