The language of the good table 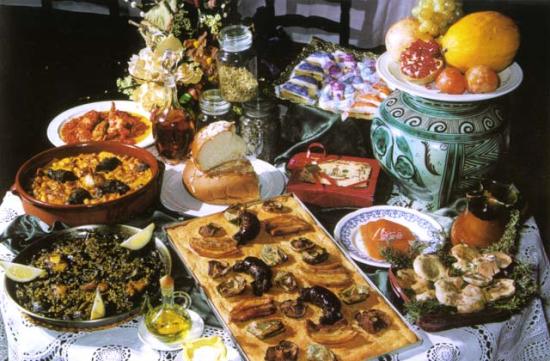 Travelling to learn a language is doing a language immersion of culture far away from books and all the things that you can learn in a class. The Valencian Community is ideal to combine both necessities, thanks to its warm weather, its sunny days at the sea and the richness of its gastronomy based in a Mediterranean diet. We propose you a walk in its gastronomy, into its markets, which are the best shop window for what it is offered by the country. Mediterranean diet is well-known worldwide as one of the healthiest diet for its variety of nutrients, based on the high level of cereals, vegetables and fish, wine in moderated quantities and the common use of oil used for cooking. In fact in 2010, was declared Immaterial Cultural Heritage of UNESCO to be promoted and be known as a tasty, wealthy and equilibrated way of having lunch and living in the Mediterranean countries: Spain, Greece, Italy and the south of France, Malta and Moroccan.

The Spanish gastronomy is not all about tapas and ham, a very good example is the valencian paella, which traditional elaboration is shown in here. A good recipe includes rice, tomatoes, vegetables, chicken and rabbit, paprika and of course, olive oil. Around the Valencian community there are a variety of similar dishes which base is rice, chicken, fish or vegetables patiently cooked as a slow-food. Places as Gandía, Denia or Vil.la Real are also keys to get a culinary level.

Being around a table with friends you can learn a lot, but also visiting some of the markets that you can find in villages and cities of the Valencian community; is here where the basis of the culinary food comes from. A window to fresh fields of the Mediterranean diet.

In the capital city of Valencia there are different neighboorhoods markets which are recommended to be visited, at the trendy area of Ruzafa, or in El Cabañal, which has the fish fished directly from the sea. Even that the most famous point is the Central Market, located near to the Town Hall, it is an attractive area for valencian people who do their usual shopping and for visitors who get impressed by its modern architecture from the begging of XX. The fresher products are found in here, in a colourful festival, textures and smells.

At the same way as travelling is not just about moving from one place to another, but to prosper being in touch with the territories and different people, getting involved by what yoy can find in the way, learning a language is much more than learning the conjugations and the grammar, is being part of the culture, learning the uses and customs of the region, its diet and its gastronomy.

This global experience is what FEDELE CV offers, a unique way of immersion in the Spanish culture in all its weight, from the richness of the Valencian community.