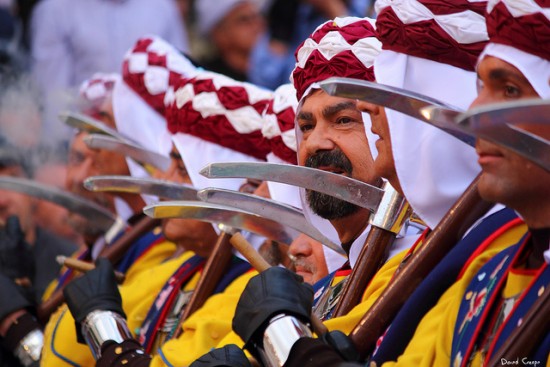 One of the most representative festivities in the Region of Valencia is Moros y Cristianos (Moors and Christians), which is celebrated during the year in different parts of the region. It remembers the Arab past and the Christian victory in the 13th century. Next weekend, one of the most spectacular re-enactment takes places, in the beautiful city of Alcoy, in the province of Alicante and less close to Valencia. Are you on?

Located in the northeast of Alicante, and close to the border with Valencia, Alcoy has been an important industrial core since the last century, thanks to the strength of its textile sector. Before that, it was the background of many battles between moors and Christians. These fights are represented ever 23rd of April, the day of St. George, patron saint of the city. The school Costa de Valencia offers the students an immersion in an unknown part of the region. A legend tells that during the Battle of Alcoy (1276), when Christians were fighting against the moors, whose leader was Al-Azraq, St. George appeared riding his horse along the walls of the city, and this entailed the Christian victory and the final conquest of the territory. True or not, this story is still remembered nowadays.

Normally, this festivity, which was also declared of International Tourism Interest in 1980, is celebrated between the 22nd and the 24th of April, but this year the city council has decided to do it next weekend, from the 25th to the 27th of April. People who want to participate will be able to see a great re-enactment of the conquest and reconquest of Alcoy by the moor and Christian troops; three days that both sides impress with their wonderful dresses and dances, accompanied by music, color, and powder.

The program is sc heduled and defined: on the first day, both parties come into the city, in an act called Entrada; the second is dedicated to St. George; and on the last day the final battle and the conquest of the castle by the Christians take place. All details and a great video can be found here before your trip. You would never think that learning Spanish would bring you to such a festivity, right?

It is a perfect way to go in depth into the Region of Valencia, further then its topics of sun and beach; a way to discover other interesting landscapes in the countryside, and its great history, which is still remembered nowadays. Education, in a wide sense, is one of the main priorities of the schools which belong to FEDELE Comunidad Valenciana (the Spanish Federation of Schools of Spanish as a Foreign Language). Costa de Valencia, escuela de español is one of them, and tries not only teach to the Spanish language, but also to have its students to live a full experience with the language.

As a plus, the trip to Alcoy gives you the opportunity to breathe pure air in the Font Roja park, a natural area full of oak trees, which is just 11 km away from the city. It is the ideal place to have a spring picnic with your friends, or to walk through the dense Mediterranean woods.