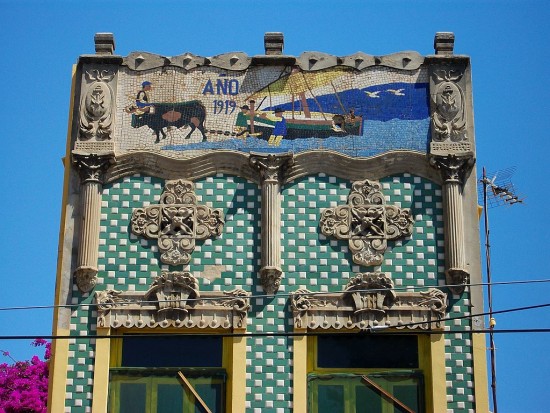 Valencia is a medium size city full of contrasts. It is worthy touring through the furthest away corners from the historical center and of the iconic City of the Arts and the Sciences. There are trendy neighborhoods but probably the most original and singular has to be El Cabañal, one of the seaside villages existing in the city that treasures a modernist architectural heritage unique in the world.

Located east of Valencia, by the sea, close to the Malvarrosa and the Grao, the Cabañal is an ancient sailor’s district that during the middle of the XIX century used to be an independent town. Its singular urban design is due to the fact that construction was carried through starting from the fishermen’s sheds already existing lined up in front of the sea. The easiest way to get to this neighborhood is though the Avenida Blasco Ibañez turning from the Serrería street. The first thing you will come across is the Municipal Market, a compulsory stop to be amazed by all the different stalls with fruit, vegetables and most of all fresh fish coming from the neighboring beaches.

From the market, on both sides of the Mediterranean Avenue, you can spot colorful private houses with ceramics patterns, a typical modernist style from the end of the XIX century. The richest streets, from the architectural point of view are La Reina, Barraca, Escalante, Josep Benlliure and those located nearby. You can brighten up the stroll by stopping at one the many new and attractive establishments that have been opening in the area to attract clients from all ages and more and more foreign students are choosing it as a place to live due to the proximity with the sea and its good location.

In the last years the neighborhood of El Cabañal has gone through a revitalization of its cultural life projecting outwardly in order to be known by the rest of the valencians as well as the tourists that find in it a striking contrast with the rest of Valencia. On top of teaching Spanish, the school Hispania also offers history and history of art lessons based on showing the routes that leads to El Cabañal. This is learning and immerging yourself in Spanish and valencian culture in a broad sense. One of the annual appointment is the Cabañal Portes Obertes (this name is in valencian language), two weeks in which the best conserved and emblematic homes of the neighborhood open their doors for everyone to see inside and appreciate the architectonic and urbanistic evolution of the area. Also the Semana Santa Marinera offers days of long processions and tradition, between the sea and the city, very peculiar for both foreigners and the Spanish themselves.

Another cultural event, established recently, is the Cabañal Intim, a small size theatre festival that is also celebrated inside the houses with a teste of chamber theatre, intimate like its name itself. You can already mark the next edition on your calendar, from the 7th to the 14th May, during the weekend.

At FEDELE Comunidad Valenciana the Spanish schools make sure that its students find the right motivation to learn and know better the country and the language through culture and social life. You are going to love the stroll with them through these neighborhoods.