A city that grows with its street art 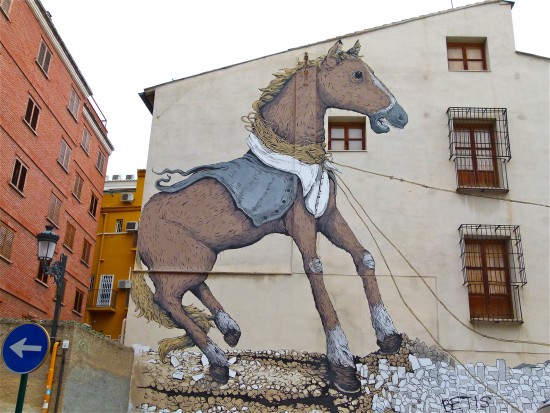 In Valencia you can experience art and culture not only in those common and well-known places like museums, markets and theatres but also in the streets. Now citizens and tourists must pay attention to those street graffiti that are much more than just drawings done as a sign of rebellion against the system. They are ephemeral works of art that reflect the creativity and inspiration of a lively and growing city. Taronja Spanish School recommends a tour through the most important names and corners of Valencia’s street art.

In recent times Valencia has stood out at international level as an important destination as far as street art is concerned. Youth hostel chains recommend it as a must see. This is a movement that has been growing spontaneously and, needless to say, without any support from the institutions which some time ago would have fight for it.

For some years now, if you take a stroll through the city, painted walls can surprise you. They are not signed by well-knownartists but anyway they are real paintings included in the city landscape, meaningful messages and exquisite in their design.

An open-air museum that already counts with specific touristic tours to get to know better the meaning the artists want to give to their works generating dialogue in some corners of Valencia. Here you can find out what’s all about. These tours are some of Taronja’s favourite. The school stands out for its rich sociocultural programme that offers different activities to make the learning of the Spanish language more interactive. Moreover, the school walls have been painted by young Valencian artists.

You can find the vast majority of the graffiti in the ring starting from the river Turia, towards the Old City, the neighbours of the Carmen, Velluters and Mercat. Even if one of the features of these artists is to remain anonymous, you can find names already famous like Luce, Escif, Julieta, Pantone and Hyuro among them. Escif cares a lot about maintaining secret his identity. This is to keep the fire alive in the message he wants to convey and he has already been compared to the Spanish Banksy. He has gone beyond Valencia’s streets and Damien Rice has chosen him for the cover of his new album, My favourite faded fantasy.

In Plaza del Tossal we can find Stop victim war’s wall by Fasim. Really close Erica II Cane painted a horse pulled by snails. And in Calle Baja the same author signs a big rabbit talks to the small grey creatures by Escif placed at his feet. In Plaza de la Merced Pantone is the author of The cycles of life. And so on. Countless graffiti painted by two, four, six different authors that make Valencia a vibrant city. In this blog they post the latest news and events.

Abandoned yards, façades, doors of abandoned shops or a forgotten street can be the canvas where a street artist can express all his/her creativity, call for a social change, tell a story, report injustice, make laugh or above all make people reflect. The exchange and collaboration between Valencian and foreign artists is normal and some of them travelled to Germany or Belgium and vice versa. Live art that has been growing in front of our eyes without even realising it.