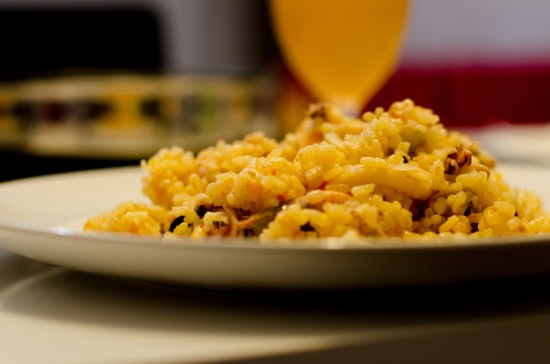 The viral campaign to include the paella in the messaging app Whatsapp’s emoticons is a good excuse to look at the origins and basis of Valencia’s most international and praised culinary export.

A rice brand and the popular Valencian comedian Eugeny Alemany have joined forces in a campaign to add a paella emoji in Whatsapp. The company Unicode who select which icons to include have preselected the icon along with 15 more and soon they’ll decide which will make it through to be included in their next update in February 2016. This has been seen as a fun way to promote the dish and specify the recipe for authentic Valencian paella and its associated traditions.

In 2014 the Wikipaella Project brought together diverse cultural and gastronomic figures in order to establish definitive recipes following traditions taken from top chefs and also from homemakers who have inherited knowledge from their ancestors. In the ten points of the manifesto you can find statements like “authentic paellas originate in the Region of Valencia, the best of which are cooked with firewood and we can enjoy them thanks to our grandparents and their ancestors”.

It has been established that authentic Valencian paella is based on the following fundamental ingredients cooked typically in a paella pan: chicken, rabbit, olive oil, salt, a local variety of white bean (garrofón), green beans, tomato, rice, saffron and water. Optionally, snails, paprika, garlic, rosemary, duck and artichoke may be added. Anything else is not “authentic” Valencian paella. However it is also understood that purism taken to an extreme does not make sense and that a dish like paella is enriched by its variants which can be found throughout the Valencian region. A “strict” paella has its origins in Albufera and its surrounding areas (the lake and national park on the outskirts of Valencia) and is different to a seafood, marine or “senyoret” paella. All these variants are seafood paellas, the “senyoret” paella has all its seafood ingredients peeled for the comfort of the consumer giving it its name.

Also we shouldn’t forget other types of paella which can be found in the La Safor (around Gandia) region, made with pepper and tuna and in Alicante where they mix fish (prawns, cuttlefish and swordfish) and meat (chicken and rabbit).

Caxton College along with other FEDELE schools in the Region of Valencia help promote the unique character of the Valencian culture and language. Gastronomy is a fundamental part of Spanish culture and for this reason we are involved