Peñíscola, the perfect skyline for a movie 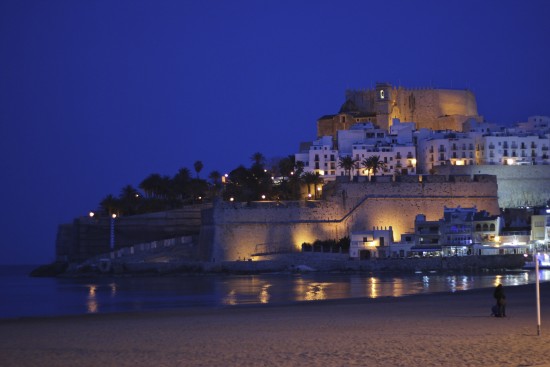 This summer we got the news that finally Peñíscola would be one of the Spanish cities chosen for the shooting of the next season of the TV series Games of Thrones. That is a great advert for the people of Castellón Province as well as the best opportunity to get to know a unique location.

In the North along the coast of Castellón Peñíscola is a town with centuries of history and a distinctive profile thanks to Papa Luna Castle, the crown on the top of the rock on which the old town is located. The name “Peñíscola” originates directly from the peninsula on which it is located. It is a unique, uncomparable profile, which has already seen one great American blockbuster: El Cid, starring Charlton Heston in 1961. Now the steep streets will be invaded with dynastic fights by the literary characters of George R.R. Martin, immortalized by the

The shooting will take place from October 1st to 9th with a selection of 1,200 extras and the whole town mobilised for this event. Since 2013 Peñíscola is part of “The Most Beautiful Spanish Places” with its unforgettable and remarkable skyline. For centuries that particular terrain served the city as a defense in numerous fights, and stays now like an icon.

The Templar castle is wellknown as the Castle of Papa Luna, Pope Benedict XIII of Avignon. At the time of the Great Western Schism (XIV and XV) there were two popes, one as head of the Church of Rome and the other one as head of the Church of Avignon. The castle was actually built in between 1294 and 1307 on the ruins of the old Arab citadel and it devides the coast of Peñíscola in two parts: The North with its extensive beaches and the modern seafront area with great views of the city. Departing from its cobbled streets you can find in the South of Peñíscola one of the rare if not the best untouched coastal areas left in the Valencia Region: the Natural Park of Sierra d’Irta. There are 12 km of protected wild and rough coastline with caves, cliffs and bays as a beaches which are a must at any time of year. Nevertheless it is an widely unknown landscape even to many Valencian. As viewpoint and recommended stop on a tour take the Badum Tower, the highest point of the park.

Other places which should not be missed during a stay in Peñíscola are the swamps Marjal. A protected nature reserve and one of the last areas for the Samaruc, a rare fish of the Mediterranean.

Schools which form the Spanish Federation of Schools of Spanish as a Foreign Language in Valencia Region, like Audio Gil–Spanish Institute, know that it is important to get language students interested in their surrounding by offering various extracurricular activities. A visit to the location of Games of Thrones seems to be the perfect idea!