Cinema, music and art to enliven the autumn 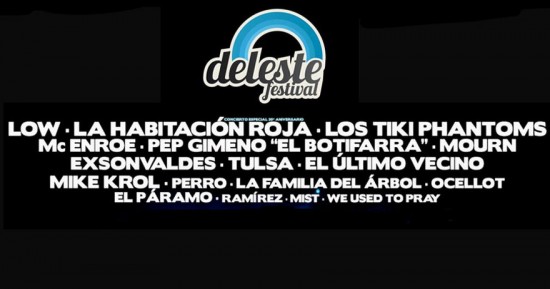 Although summer seems the classic high season for festivals, the cultural scene is also facing quite alive the autumn. We propose three of them very different in the city of Valencia: the “Mostra Viva de cine”, the music festival “Deleste en Rambleta” and “Intramurs”, in the old town.

A pleasant way to delve into language learning is an immersion in the culture that the language itself offers and that is what promote schools that are part of the Spanish federation of schools of Spanish as a foreign language in the Region of Valencia, including Intereuropa, located in the heart of the capital. The “Mostra Viva del Mediterrani” is the new brand that has been developed after the end of the “Mostra de Cinema del Mediterrani”, a festival held in Valencia over 32 years, which brought together international films from all over the Mediterranean. That appointment disappeared but workers and organizations decided to somehow recover the spirit to continue offering films and culture during the month of October.

The “Mostra Viva” is now a multicultural offer between cinema, art, music, literature, theater and gastronomy. This edition to be held from the 14th until the 18th of October will pay tribute to Ovidi Montllor a singer from Alcoy. Other sessions of the Festival are and Cinema and Women, recent Arab Cinema, the Lux Awards documentaries, short and medium-length films produced in Europe, besides the usual tributes to the ahead mentioned Montllor and to the writer Rafael Chirbes who died recently.

Meetings and projections are divided into different spaces from the centre of Valencia, as La Nau, the MuVIM, the botanical gardens, the IVAM, the SGAE’s headquarters and the Cultural Centre “Octubre”. There will also be activities for children as the “Mostra educativa”, film workshops for children that will take place at the MuVIM. It is said that they want to be the great cultural festival of the Valencian autumn and a space for dialogue between the different Mediterranean peoples.

The weekend of 23 and 24 October, the appointment is at the “La Rambleta” hosting the “Deleste”, a music festival called “gourmet” which brings together select names of the national and international scene. And it is said gourmet because in the “Deleste” there is no multiple schedules that make it impossible to attend all concerts but intends to enjoy a weekend with good music, enjoyed with moderation, without rush, and with excellent sound conditions.

In its poster stand out the Americans Low, the French Exonvaldés and the valencians La Habitación Roja who celebrate its 20th anniversary on stage. Other names that attract attention are Mourn, McEnroe, Tulsa. To take into account also the morning proposal of Deleste Kids, with games, foodtruck and paella, as well as several free concerts designed to share in family.

Finally, from the 22nd of October until the 1st of November it is celebrated the festival Intramurs, as always, and as its name suggests, in the space that is located within the ancient walls of the city of Valencia, in its old town, from “las Torres de Serrano” and “Quart” inward.

The event is all around art in all its disciplines, with exhibitions, live performances, graffiti live, live music, dance,… activities that fill the streets and squares of the historic centre. In this editions, a stop-motion animation workshop is offered and the invited country is Holland.