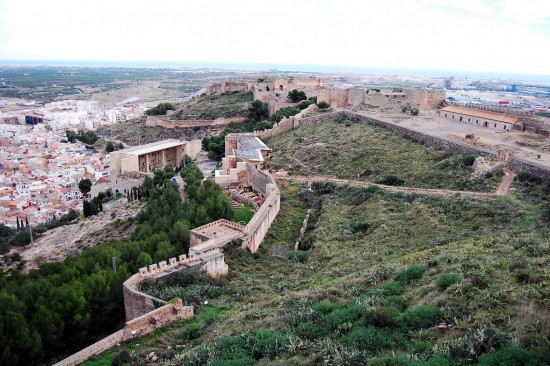 Why not get away from it all to somewhere not too far from Valencia by availing of a chance to do something very different? In Sagunto, half an hour away by car to the north of the city, you will find yourself in an ancient landscape, crowned by a breathtaking Roman fort. Not only that, but during the coming weeks, the latest November Noir festival (`Novembre Negre´) will be held, dedicated to the `genre noir´ in all its aspects: cinema, literature, music, comics and cuisine.

Sagunto is the capital of the district of Camp de Morvedre, and its population is divided into two important urban areas, separated by some five kilometres distance: Sagunto itself, inland, and the Port of Sagunto on the coast, which grew out of the development of the iron and steel industry at the beginning of the 20th century. Sagunto´s history goes back to the times of the Iberians two centuries before the birth of Christ. As a city allied to Rome, its location was strategic for maritime trade, and it was always an important stronghold for the Roman Empire. Remains of this remote history can be seen in the old part of the town, with two well-conserved main sites: the theatre and the fort, which look down on it from on high. Visiting both is a must-do, as is a stroll through its cobbled streets. Facing out to sea, the Port of Sagunto offers other delights, not too far from its beaches, which provide a wonderful contrast. The remains of the `Altos Hornos´ (`Tall Ovens´) are a worthy example of industrial architecture which shouldn´t be missed, together with sites such as `La Gerencia´ (a specially-built factory town). Now in its seventh year, `November Noir´ will mean that for a whole month Sagunto will have plenty of new and original cultural opportunities, too, in particular the `genre noir´: exhibitions, opportunities to meet writers, cinema showings, concerts and cuisine. This year, the organisers have prepared a tribute to Sidney Lumet, a great celebration of the anniversary of Pulp Fiction, special showings of Goodfellas and Miller´s Crossing (`Uno de los Nuestros´ and `Muerte entre las Flores´ respectively in Spanish) – both are now 25 years old. And from among the best of the last year´s films, the prize of `November Noir 2015´ will be presented to Daniel Monzón as director of El Niño.

As well as cinema, literature has a special place, and one of the classic events of the festival is Author Noir, a meeting with a writer of special renown associated with the genre. This time it´s the turn of the writer, Paco Gómez Escribano, although there will also be forums with leading figures of the present genre such as José Luis Muñoz, Dani El Rojo and Pere Cervantes, among others. One of the main events to be served up is on Saturday 21st, with a free concert by Parade and Papaya in the youth centre, two indie bands who will add freshness and rhythm to the festival.   Other activities provided by November Noir are a children´s theatre at weekends, and a ` gymkhana noir´ in La Gerencia. Finally, as something new, throughout the whole month and going under the name of Carvalho´s Spoon (`La cuchara de Carvalho´), you can savour lunchtime menus in both Sagunto and Port of Sagunto, inspired by the recipes of Manuel Vázquez Montalbán.

Españole school, like all others in the Spanish Federation of Schools of Spanish as a Foreign Language (FEDELE) in the Region of Valencia, wishes to enchant its students by providing them with things to do that are definitely not your average activities. How about a stroll around Sagunto and its `cinema noir´?