Morella, a Symbol of the Region of Valencia 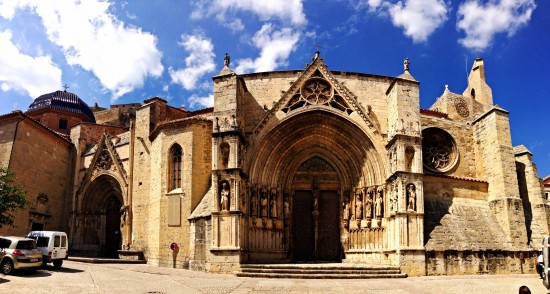 One of the most iconic places of the Region of Valencia is Morella, always outstanding among the most beautiful towns of Spain. Its monumental skyline on the mountain top, surrounded by 16 towers and 5 gates of the ancient walls, is a place frozen in time and at the same time full of attractive succulent. One of the ¨in-places¨ of the region.

All the FEDELE (the Spanish Federation of Schools of Spanish as a Foreign Language) schools include trips to Morella into their programmes, however, this time it is the Spanish language school AudioGil from Castellón de la Plana, which leads us there. To begin the journey, we will have to get wrapped up and approach the outskirts of the town called  Morella la Vella. There a famous cave can be found which belongs to the UNESCO world heritage because of its great value and good conservation. Morella is located in the northern part of the Province of Castellón, almost at the border to Catalonia. It is 60 km from the coast, 100 km from Castellón de la Plana and around 170 from Valencia. It is the capital of the region of Els Ports. The trip is definitely worth it, as you see the town at the horizon. As we go through some of its five monumental gates, we discover the good conditions of the ancient heritage dating back to prehistoric times. You will also realise its strategic position that has always been fought for in different periods, but stresses its legacy from medieval times. The good work of local restoration that has saved the remains is rated with an award of the World Heritage Cities Award of the UNESCO. The wall of nearly 2 km length is crowned by the castle on 1000 m height. Within the city there are several points of interest. The Convent of San Francisco has a big church, a beautiful arched cloister and impressive gothic wall paintings from the early 15th century showing the “Dance of Death”. The Archpriest Church of Santa Maria Mayor is an excellent example of Gothic religion with its big entrance “Door of the Apostles” as an invitation letter. Inside you can find the largest Baroque organ of the Region of Valencia. The climate here is Mediterranean mountainous when snow is common in the winter months. That makes Morella a very attractive location at this time. Besides its rich cultural heritage we do not forget the culinary specialties offered and natural places. Numerous hiking trails can found around, if we still do not need a break by walking through its cobbled streets. The Dinosaur Museum needs to be mentioned, too, because of the paleontological remains found in the area with an Iguanodon as the main sample.

Between January and March there are truffle food festivals celebrated, with all the attention to this extraordinary fruit, as it is quoted in the kitchen. Meat and mushrooms are also part of its traditional dishes. But Morella offers throughout the the whole year numerous cultural activities around music, folklore and crafts, which always give a good reason to escape to the north, isn’t it?