Valencia is all decked out for Christmas! 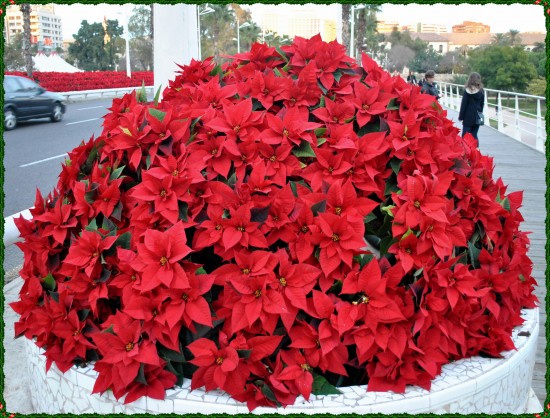 At Christmas every city becomes a big showcase for temptations for all ages. Today we will show you a tour of the most traditional plans for Christmas in Valencia: Nativity scenes, street markets, fairs, and more.

The route proposed by Intereuropa School of Spanish starts at its own head office, in Plaza del Ayuntamiento (City Hall Square), where a huge Christmas tree is glistening and wishing you a Merry Christmas. You will find many others in some of the most important squares of the city: Benimaclet, Doctor Collado, Creu del Canyamelar, Patraix, Campanar, and San Valero. The route continues through the different nativity scenes that are displayed all over Valencia, an activity that will help you learn how this traditions are cherished in Spain. You will find the Historic Nativity Scene by Pedro Ródenas—made up of 150 figures—at the City Hall’s Crystal Room. Not far from there, in the gardens of Plaza de la Reina, you will find the crib that Gremi Artesà d’Artistes Fallers donated to the city. You can also visit other cribs in the Cathedral, the City of Arts and Sciences, the Central Market, the Colon Market, and the Church of Santa Mónica (near the river, by Serranos Bridge.)

Christmas markets, which are real ornamental deployments in other parts of Europe, have their little place here too. You can find the traditional Christmas market near Central Market, at Avenida del Oeste, or others in Colon Market, and Mercado del Cabanyal. For the first time, this year Mercado del Grao will open its facilities at the end of Avenida del Puerto. The beautiful sunset at sea that awaits you there is worth the stroll.

At the City of Arts and Sciences there are a lot of activities scheduled from mid-December until after Epiphany (January 6th), with a Christmas market, workshops, entertainment shows and games, food trucks, and an ice rink. You can find more rinks in Plaza del Ayuntamiento, and the malls: Aqua and Nuevo Centro.

Another important day of this month is December 30th, when San Silvestre popular race is held. It takes place annually (ever since it was first held in 1983), over 5.5 km through the streets of Valencia and with its starting point at Calle Xàtiva—right in front of Norte Railway Station—and its finishing line in Plaza del Ayuntamiento. A good excuse to dress up and play sports together in a friendly and stimulating environment. This list of events is rounded off with two classic ones at this time: the funfair and Expojove. The funfair is now set near the river, towards Poblados Marítimos—at the intersection of Calle Ingeniero Manuel Soto and Avenida de Francia. Expojove, which is nothing but the 34th edition of the Fair for Children and Youth, will take place in several of Feria Valencia’s pavilions, from December 26th to January 4th. There you can participate in several activities, like theatre, exhibitions, workshops, bouncy castles, sports and traditional games for the whole family, under the motto La ciència mola! (“Science rocks!”)

An unforgettable Christmas experience in the purest Valencian style.