History and good food in Segorbe 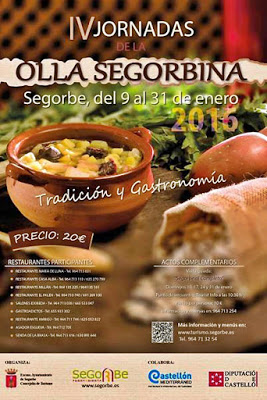 Exactly in between the cities Castellón and Valencia, lies Segorbe. Even in the colder months it is a warm spot thanks to the cuisine and it is always a great place to do an excursion because of the beautiful architecture and the old city centre.

To get to Segorbe, it only takes a car ride of just over half an hour inland (towards the north if you are coming from Valencia and towards the south from Castellón) and there are great train connections as well. It is the capital of the comarca Alto Palancia and a tourist attraction all year round because of the monumental heritage.

Enforex Valencia offers its students a trip to Segorbe to experience las Jornadas Gastronómicas de la Olla Segorbina (days dedicated to the cuisine of Segorbe from 9 till 31 January). These days are held for the fourth time to let the visitors experience the most typical food of the comarca. This winter, schools that are part of the Spanish Federation of Schools of Spanish as a Foreign Language in Region of Valencia organize trips to experience the country the best way possible. The town is situated 360 metres above the sea level, between the hills of Sopeña and San Blas and the valley of the river Palancia, right next to the mountains of Espadán and Calderona and is a fundamental place, the doorway between the coast and the interior of Castellón. It is the most important commercial centre in the area and has a rich soil to grow fruits and vegetables. Recently, the viticulture has also been reactivated.

The history of the town goes back to prehistoric times. Traces have been found in the hills of Sopeña and since then Segorbe survived through the Iberian, Roman and Arabic periods and the Reconquista in which the king of Aragon ruled. The old part of the city centre is declared entirely as cultural heritage, so it is worth it to take some time to admire the well maintained medieval remains.

The Wall, from before the 13th century, and the aqueduct show the design of Segorbe with towers and arcs on all sides, like the tower Botxí, which means executioner in Valencian and used to be the residence of the executioner. The Castillo de la Estrella (Castle of the star) is a medieval castle build on an old Iberian acropolis that was used during many centuries of splendour when it was occupied by the Aragonese kings and the dukes of Segorbe. The big altar in the Catedral shows an image of the best times of the town since the 18th century. Inside the old Palacio Ducal you can find the city hall. This palace was built in de 16th century and has a stunning coffered ceiling, built by the Moors. Segorbe has a beautiful heritage, especially the religious buildings. For instance the Catedral Basílica from the 13th  century, build in Gothic, Romanic and Neoclassic styles. The Baroque churches of San Martín, San Joaquín and Santa Ana are worth visiting as well.

Segorbe also offers a wide variation of museums. Like the museum of the Catedral, the museum of archaeology and ethnology, where you can find old remains found in the area from the Paleolithic age until the middle ages, and the museum of olive oil, where you can learn all the details of the process of cultivating and producing the typical olive oil of the town.

It looks like we would need more than one visit to see everything this town has to offer, especially with the gastronomic trip we have prepared, right?