Theatre tour besides the sea 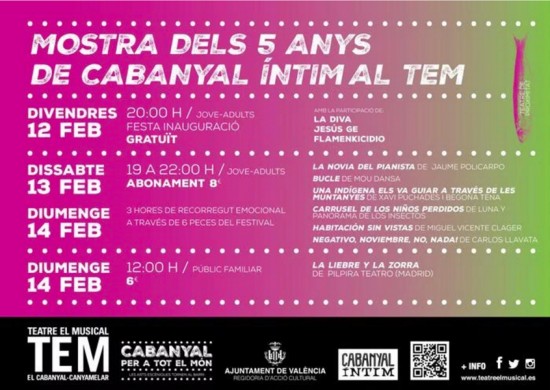 We make the most of the Cabanyal Íntim festival exhibition hosted by the Teatre El Musical to make a tour through the maritime quarter, and its old and new premises which bring life to the area in winter and summer.

The parties and other interesting leisure offers in the city of Valencia go beyond Ruzafa’s quarter. In the last years the quarter called Poblados Marítimos have been revitalized with new premises, an increasing population of young people –and lots of foreign students- living in this area, and cultural plans that move the focal point of the city far away the center. Facing the sea, the team of Costa de Valencia, Spanish language school offers a tour through the Cabanyal, maritime quarter par excellence, and its theatre proposals. Recently re-opened, the Teatre El Musical, located in the Rosario square, is one of the quarter action cores. Easy to get, between the Market square –which is really worth a visit, and is open on Friday afternoons to sell fresh fish directly brought from the fish market and from the closest beaches-, and the sea, the theatre has updated its program with concerts, theatre for all ages, dancing, and workshops. Just opposite the theatre we can find La Paka, one of the first young premises in the area, opened 10 years ago and which offers good food and atmosphere every day in the week.

During February, the Musical theatre hosts the performance A house in Asia by the company Agrupación Señor Serrano, prized in 2014 as the best one in the cathegory of new trends by the critiques in Barcelona and it was performed during the last Biennale in Venice. The work gives a forceful vision of the world after the 11-S and different languages are mixed up on the stage: video, sound, performance…

The weekend of the 12th, 13th, and 14th February, the Musical will host the exhibition “5 anys de Cabanyal Íntim”, a selections of the best and most representative exhibitions which have taken place in the houses of this quarter for five years. The Cabanyal Íntim will take place during two weekends in the middle of May, and we will have the chance to see seven of its best performances. This time, instead of being spread by the houses of the quarter, the exhibition will be a tour through the different rooms of the theatre, a building with a great architectonic value realized by Eduardo de Miguel.

The inauguration party will be on Friday, the 12, and the entrance will be free of charge. Music concerts, poetry, dance, etc., will be performed, all with a cabaret touch; a great way of getting in touch with a maritime, theatrical, and cultural atmosphere Very close, the new restaurant Ca la Mar offers traditional Mediterranean food in simple and good tapas to take for dinner after the festival. An amazing closure for this tour could be to take a long walk by the seafront to the Patacona, where La Más Bonita is located, one of the most popular premises in Valencia at the moment and full of people at any time; the perfect place to have a good gintonic or one of its famous cakes.