The land of music 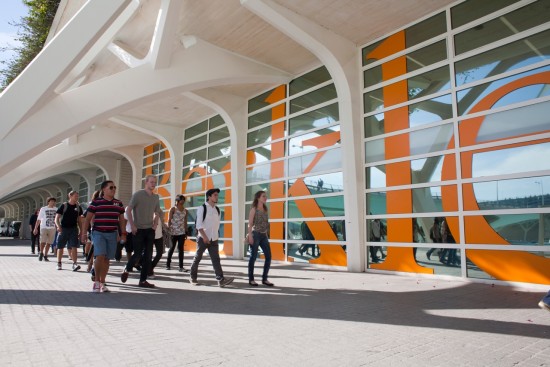 Berklee College in Valencia again reprograms the concert series a Lake of concerts alongside of the Science Museum Prince Felipe. An unmissable cultural event to outdoor in a privileged environment to highlight the role of music in Valencia.

When students arrive at Valencia they are surprised of the importance of the music to us, because it is one of the best kept secrets of our Region. At Enforex , we offer a wide range of cultural proposals that leave aside known tourism of sun and beach, party and paella. Our students, from a wide spectrum of age and from all over the world, find an unexpected wealth: music fills the streets at every local party, in each village, each neighborhood, not to mention the Fallas, that impregnates the streets to the sound of hundreds of bands running through them as well as gunpower and fire. Music in Valencia is a gift for foreigners who come to meet us, to live and learn the language, in Enforex discover it even more universal. Good example of this is the choice of this city as a settlement of the only campus to the prestigious Berklee College of Boston has opened outside the United States. Every day during the week it is possible to attend or participate in events of live music in venues such as Radio City, Jimmy Glass, Bigornia, El loco Club, La Edad de Oro, Café Mercedes or Wah Wah among others, something that draws attention to a small town.

In the Region of Valencia are registered almost thousand seven hundred musical societies among orchestras, bands, choirs, groups of camera, big bands and groups of ‘tabalet i dolçaina’ – two traditional instruments of the region-, figures that placed it ahead of any other Spanish regions, which noted the deep roots of musical culture. The average of three bands for each municipality is one of the main reasons why Berklee chose Valencia to settle in 2012 and the school contributes also involved in the cultural agenda of the city. Last year started this series of free concerts called a Lake of concerts, which you can enjoy every Friday from April to October at 20 h. in an outdoor stage installed in the Lake South of the Museum of the City of Arts and Sciences. Several performances every Friday in which bright students in the school – students of these exclusive classrooms are graduate and professional of all ages – along with some of their prestigious teachers perform unique concerts covering all styles: jazz, flamenco, Latin, rock, soul,… in a very special setting. Perico Sambeat, Julien Osty Trio, Catherine McDonald, The Interlopers, Oscar Ettedgui or Gary Willis are only some of the names provided. Here are all of the programming.

After the days intense classes or work is a great way to start the weekend, right?