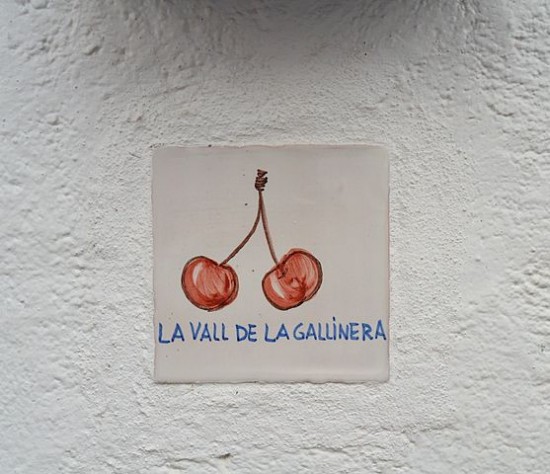 The Region of Valencia has little known treasures hidden to tourists who have limited time. One of them is a corner in the province of Alicante, near the sea but surrounded by mountains and orchards of fruit trees called Vall de Gallinera.

Inland and towards the north of the province of Alicante, within the region of the Marina Alta, there is a group of villages called Vall de Gallinera, consisting of eight small towns distributed along the 16 kilometres of the valley. It starts at Benirrama, crossing Benialí, Benissivà, Benitaia, La Carroja, Llombai and Alpatró, finally ending in Benissili. It is curious that more than 15% of its few inhabitants are foreigners installed in isolated places far away from the noise of the coast of Denia and Oliva. Top School, in Elche, receives throughout the year visitors who are keen to know the Region of Valencia and improve their level of Spanish, so they are well aware of this trend and the attraction that the Mediterranean way of life awakens beyond the beach and party life. From these wishes, Top School propose to their students different excursions that often surprise them, like this one. This is a different place, this is why the charm of Vall de Gallinera is one of a kind. In spring, the cherry blossoms are the real show, as well as almond trees. At any time of the year the hiking routes attract many nature lovers. The road which goes across the valley shows its steep topography, letting us enjoy the view from both sides of the road with solitary villages and beautiful scenery where we can find peace and quiet.

Twice a year, in October and March, on or around the fourth of these months, a solar alignment takes place with the Foradà mountain. At a certain hour in the evening the rays of sunlight go through the hole at the top of it, illuminating the remains of the seventeenth century Franciscan monastery which was, in fact, built there to take advantage of this astronomical phenomenon. Here, a video.

Throughout history this rock has been considered attractive because of its dominant position and its striking summit, even though it is not the highest in the valley -something more than 700 metres – offering great views to all directions, including the sea to the East. The Tossal of the Creu standing at over 900 metres is another interesting excursion, with a stop at the Iberian settlement of Xarpolar, where there are archaeological remains from that era. These valleys, like the neighbouring Vall d’Ebo or the Alcalá Valley to the South, were inhabited for more than six centuries by the Arabs, there are remains of castles of this period in Benissili and Benissivà. After the expulsion of the Moriscos it remained almost uninhabited until the Duke of Gandia repopulated the area with families brought in from Mallorca in the seventeenth century, which explains the peculiar Valencian accent heard in these lands.

Let yourself get captured by their hospitality, enjoy its rich cuisine and long walks in its quiet corners … you will want to stay or to return soon to Vall de Gallinera!