Get to know the painter Pinazo 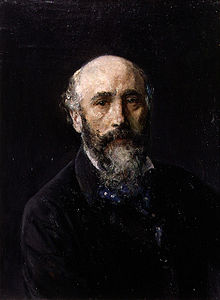 The government of Valencia declared 2016 as the year of Pinazo with the aim of increasing knowledge and appraisal about the painter Ignacio Pinazo, one of the leading figures in Spanish art between the XIX and XX centuries. Today we are going to tell you who he was and why he was so important.

The Region of Valencia counts many artists in its heritage, which are not always well-known, like – the most famous one – the painter Joaquín Sorolla whom we recently talked about, or the sculptor Mariano Benlliure. Today, taking advantage of the fact that 2016 has been announced as the year of Pinazo because of the centenary of his death, we are going to reveal his life’s work as one of the greatest exponents of Spanish Impresionism.

In Taronja Spanish School, art and iconoclasm are two important and distinctive features. Students get here with the will to learn and improve their knowledge about this quite small city called Valencia, where the weather is always good, and we are put in charge of teaching them the Spanish language together with the understanding of the region’s artistic heritage. We are not short of examples during the year: the art of Las Fallas, many cultural festivals around the city, the modern architecture of Colon’s Market, the life and the streets in Ruzafa’s neighborhood… this is our way to pass on some Valencian taste. Born in Valencia in 1849, Ignacio Pinazo practiced many professions in order to earn money during his life, simultaneously practiced as a painter because of his humble origins, but thanks to a scholarship he got to travel to Rome so that, starting from these couple of years’ experience, his work changed, making a big step forward.

From this first period, the important painting Los últimos momentos del Rey Don Jaime (1881) stands out: painted in Rome, considered as his masterpiece and positioned on Museum of Prado’s walls. Nevertheless, the years in Rome inspired him to dedicate more to intimate issues, familiar ones – together with portraits on commission – instead of historical scenes of his first period. He became an influence to the Florentine School of Macchiaioli – in italian it means ‘the stained ones’ – whom opposed to the academic style and gave all the importance to light and shade effects and color.

Even if Joaquín Sorolla is more renowned than him, Ignacio Pinazo is considered as his precursor and the master of light and shade effects and color process, as a way of space defining in painting. His nudes, self-portraits, son’s portraits – who inherited their father’s talent -, La fiesta, La lección de memoria o A la orilla del estanque are only some of all his work which is not sufficiently seen and known, not even by the Valencians themselves. Nowadays, his heirs and the institutions from the capital and Godella – a close town in which he lived during his last years and where he died – are determined to solve it.

A hughe exposition is scheduled in Modern Art Valencian Institute (IVAM) after the summer period, called La fiesta, La lección de memoria o A la orilla del estanque, which tries to offer a whole new reading of his life’s work, regarding art between the Impressionism period at the end of the XIX century and the new concept of painting which extended at the beginning of the XX century. The IVAM owns a big amount of works by Pinazo – up to 100 paintings and 600 drawings – which haven´t been exposed until now. The Museum of Fine Arts owns many of his works too, which have never been publicly avaliable but from this year on are going to be visible and ready to be discovered in all of their glory. We sign up!