The city of silk 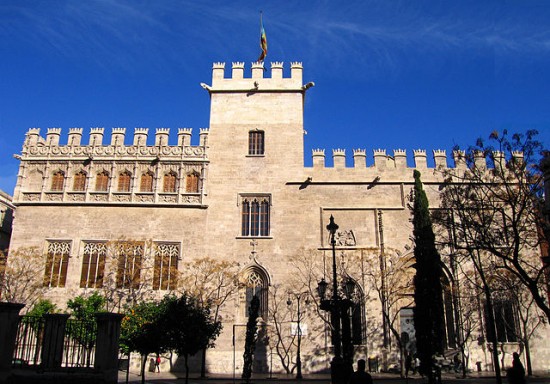 Valencia is been chosen the Word´s capital of Silk by the UNESCO, as a way to highlight the historical legacy for precious materials such as silk and handcrafting. Let us take you to different parts of the city where you will find this amazing legacy.

At Centro Europeo de Idiomas Ausiàs March, we are constantly organizing exchange programs with schools from many different countries, receiving students with different backgrounds that are always ready for an Spanish immersion in our culture and history. This year UNESCO is putting the eye on Valencia for the “World´s capital of Silk” nomination – the verdict will be known at the end of the year-, and also on Las Fallas, so to be recognized as Intangible Heritage of Humanity.

One of the main purposes for the UNESCO (United Nations Educational, Scientific and Cultural Organization) is to assure the conservation and protection of the world’s inheritance of books, works of art, monuments of history and science, as well as to protect the universal culture in which the “Route of Silk” is also included. Every year one city is chosen following this millenary route that took place no less than 2300 years ago. The objective is to keep the memory alive and to reinforce the bonds between so many cities on the planet linked under the same purpose. This year Valencia is been selected! The following video explains why. Valencia is now also linked to this group of amazing cities around the world sucha as Istanbul in Turkey, Baku in Azerbaijan, Almaty in Kazakhstan, Muscat in Oman, Tehran in Iran, Samarkand in Uzbekistan, Xian in China and Venice in Italy, amongst others. This event occurs at the same time of the 20th anniversary of La Lonja de la Seda (also called Los Mercaderes) when 20 years ago was declared a World Heritage Site. This civil Gothic masterpiece was designed by Pere Compte and built between 1482 and 1548, has become one of the most important monuments nationwide. Among its impressive columns businesses of all kinds of trade were taking place here in the Golden years.

The production and internationalization of silk was introduced by the Arabs in the eighth century with the expansion of Al-Andalus. In the city of Valencia the guild of craftsmen for silk was located in the neighborhood of Velluters, also included in this route. Another essential stop is the Colegio Arte Mayor de la Seda, in calle Hospital, which thanks to the Hortensia Herrero Institution, you will be able to enjoy a completed restored and refurbished building where the Silk Museum is hosted. At this museum you can appreciate in detail everything related to silk manufacturing technique, with old sketches, remains, and ancient looms, just how it was done in the seventeenth and eighteenth centuries.

You will be amazed to find out that up to the present, this handcraft technique still existing and is everywhere you look around in Valencia at the Fallas time in March. A lively history that will surprise you!