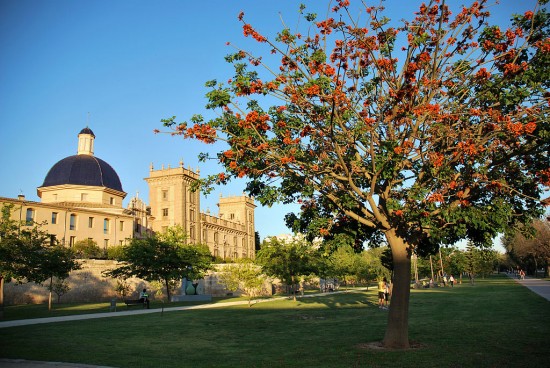 Its outline over the old Turia’s riverbed in the height of the city center of Valencia defines among others the city’s landscape. Today we want you to discover the Fine Arts Museum and all its treasures.

In Costa de Valencia, Spanish language school, we try to adapt to the different profiles of students who come from all over the world willing to absorb as much as possible from the Spanish way of life, and specially the Valencian traditions. That is why our intensive courses can be combined with other complementary –such us Spanish cinema, business Spanish, pronunciation, Spanish history or literature, football, conversation…, depending on the students’ interests. And many varied activities are also offered, from the patron saint festivity in Picassent –a town near Valencia, in l’Horta Sud, to the worldwide known Tomatina, and also others like the one hereby proposed: a walk through the most classical art in the Fine Arts Museum.

in the city, which everyone knows and walks: besides the Jardines del Turia, at the Trinidad bridge and opposite the Torres de Serranos… do you see it? Yes! It is the one with the blue tiles dome. Inside there is a great art collection from which just a minimum part of it is exposed. However, a new stage has been announced and moretreasures will be shown in order to increase the value of this museum, one of the most important galleries in Spain of classic art from the 14th to the early 20th century.

Among the most valuable art pieces we can find a famous Autorretrato by Velázquez, La Virgen con el Niño y Donante by Pinturicchio and a number of Gothic panels from the 14th and 15th centuries. Open since 1839, the building where the museum is located since the end of the Civil War dates from the 18th century. Its structure is divided in two parts, a temple and a seminary, and it shows the transition from Baroque to neoclassical. Goya, Piranesi, José de Ribera, Van Dyck, Pieter Brueghel el Joven, Juan de Juanes or El Greco, are some if the numerous art masters which the San Pío V Museum heritage is composed, although many times even the citizens of Valencia have ignored it.

Amongst the most ancient masterpieces we can find the Retablo de Fray Bonifacio Ferrer by Gherardo Starnina, painted in 1395, and the Retablo de la Vida de la Virgen by Pere Nicolau, dated from 1404. From the period between the late 19th and early 20th centuries, the works by Joaquín Sorolla, Ignacio Pinazo and Cecilio Plá stand out. In this new stage, sculpture will be given its due weight –with important pieces by Mariano Benlliure, and also funerary works from the Gothic and the Baroque.

And in order to complete our bath of art, why not visit the Royal Monastery of the Holy Trinity besides the museum? Built in the 15th century, the construction is a great example of the Gothic art, with a bare Baroque decoration in the interior. In 2014 the last cloistered nuns left the building where they used to live, and whose religious order –the Poor Clares, had occupied for five centuries. To get into those walls is to have a full breathe of history.