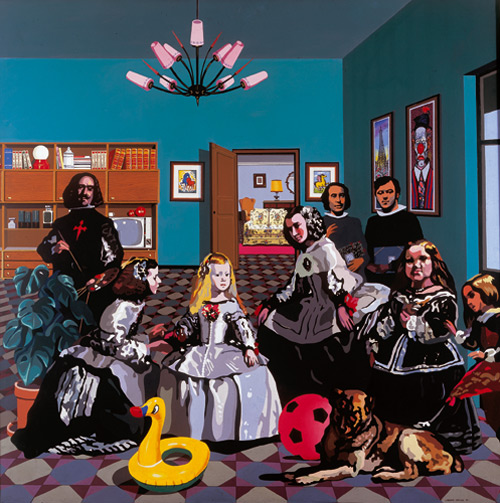 Summer holidays have running out but even so, also in autumn Valencia offers an attractive array of activities and sights.Today we are proposing a plan with which you can enjoy contemporary Spanish art:An exhibition at the Centro Cultural Bancaja which focus on Equipo Crónica.

With the arrival of autumn cultural plans abound in our cities, as a way to fill the agenda when the days shorten and holidays, the sun and the beach are running away. Intereuropa school of Spanish focus on the importance of the social and cultural integration of our students, organising cultural activities so that they don’t learn only a language, but also Region of Valencia’s culture. They love the comfort of our city and all the activities in the old river, this huge park along the city.Today we are going to stop just in front of it, at the Cultural Centre of Bancaja where visits are allowed until the month of January. Here is inaugurated a seasonal exhibition hosting the artistic band Equipo Crónica.

relevant look-back exposition created so far of the Equipo Crónica with more than 165 projects. This is an extensive tour that ranges from the simultaneous origin of Equipo Crónica with the movement of “Estampa Popular” to Valencia at the end of 1964, to his last works in the late 70s and early 80s.

This artistic collective was born in 1964, as a consequence of the España Libre’s exhibition in the Italian city of Rimini, which was a meeting of the most important painters of that ages such us Antonio Saura, Eduardo Arroyo or Antoni Tàpies in which decides to meet other trees artists from Valencia Rafael Solbes, Manuel Valés and Joan Antoni Toledo.Their common feature was to file the political reality of those recent years of Franco’s regime in Spain, they did it with the application of wit and sarcasm of Pop’s style. In their works they used to be referred to Spanish art’s classics artwork of all ages such us Velázquez or Picasso to mix in a representational way Realism and Critical in order to help the viewer to catch the message and get closer to him. Their first projects ready to be seen for the first time in Valencia, mainland of the artists, are composed by several sizes of canvas and sculptures and got lot of visibility in Spanish art and in artistic backgrounds from Italy France and Germany.

Equipo Crónica’premise was to work always in group and to keep their arts anonymous. In addition, they worked with the cooperation with communication media , history and Spanish socio-political reality of that period. Now we can discover the iconic world of this relevant side of the Spanish’s art related to the end of the XX centuries with a flashback that links privates artworks with museum from all over Spain.

So, would you like to enjoy a cultural weekend?