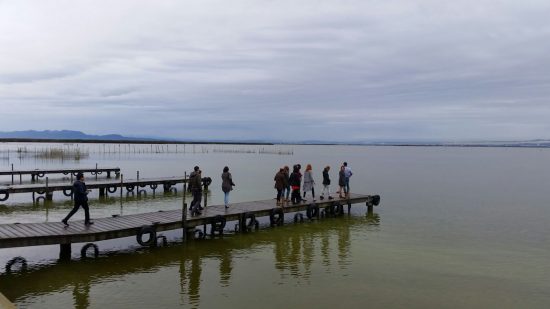 Representatives of American high schools and language agencies visited Valencia during one week to support international communication. The goal of this meeting is to connect both countries more profoundly and to transmit a deeper image of Spain to their clients and students. Therefore, the schools members of the association of schools of Spanish as a foreign language of the Region of Valencia FEDELE CV located in Valencia (Costa de Valencia, Intereuropa AIP, Taronja, Enforex, Españolé, Hispania), Alicante (Proyecto Español, TLC Dénia), and Castellón (Spanish Institute), organized an impressing stay for the representatives, which will make it easier for them to place future students adequately. On Monday, all the agents arrived, so the program could start on Tuesday. In the morning, they visited the city of Valencia: On the bus they got to see the Ciudad de las Artes y las Ciencias, the port and the Malvarrosa beach. By foot, they crossed several squares such as the town hall square, the Plaza de Toros or the Plaza Redonda. On their way they passed the Mercado Central and the Lonja, as well as other beautiful monuments which are hidden in Valencia. The afternoon was followed by a visit in the fabric of porcelain in Lladró.

During Wednesday, the participants had an appointment with the representatives of the domiciled Spanish language schools. They also got to discover the popular Natural Park “Albufera” and the natural finish beach “El Saler” – Valencia has so much more to offer than a nice city and seafront! Afterwards, they assembled in the city “El Palmar” to listen to the presentations of the Spanish language schools and their products. In the afternoon, they went on a boat trip on the lake of the Albufera and attended a paella cooking show. To finish, they visited several Spanish language schools to get a closer image.

The Thursday was followed by an excursion to the touristic city Xátiva, to give the Americans an insight of the diversity and beauty of Spain – a language holiday in Spain really is worth it!

On Friday the representatives visited the Mercado Central for a second time – but this time to buy the typical ingredients of paella, as they would cook one by themselves! It is a well-known fact that Valencia is known for its culinary specialties. This was a great finish for the participants, the finish of a trip that showed Spain, Valencia and the Spanish language schools from a new and a very interesting view.

Invited were the representatives of the American schools and agencies of the Valencia Tourism Agency and the Association of Spanish language schools of the Region of Valencia FEDELE CV. Thanks to this visit, the representatives of the American educational institutions got to know better the high qualified offer of Spanish language schools in the province of Valencia.